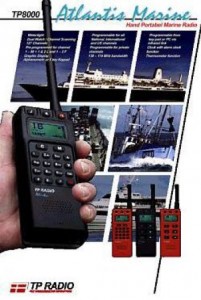 TThe TP8000 Atlantis Hand-portable radio is a unique product, with a design that combines outstanding mechanical robustness with state of the art technology. The TP8000 Atlantis is a type-approved Marine Radio and it is also type-approved for ON BOARD communication (UHF version). Being watertight, it is the ultimate communications tool for the harsh marine environment.